Hi Sebastian,
I’ve been experimenting with sorting targets by transit time, and am a bit confused by the sort order …

If you select this icon …

the first target at the top of the list transits at SUNRISE. 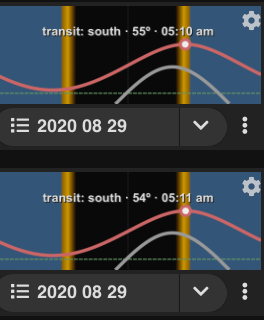 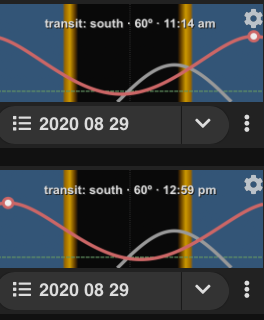 As you go further down, each transit occurs later and later, moving again from LEFT to RIGHT, until you reach just BEFORE sunrise again.

I think it would be much more intuitive if the first transit in the list occurs just AFTER midday, and the transits are shown in continuous order progressing linearly to just BEFORE the following midday.

That would prevent the transit time suddenly changing from just after midday to just before midday half-way through the list.

If you reverse the sort order, the opposite happens of course.

I was never certain what the sort-order icon meant - I think that it would be more intuitive if the icon changed the direction of the arrow, with an upward-pointing arrow denoting going forward in time, and a downward-pointing arrow going backwards. Or perhaps a clock-face with a curved arrow showing clockwise (forward) or anti-clockwise (back).

The sorting by times starts at your initial observing hour - or astronomical sunset when inside your observing lists. I found this is the most convenient sorting instead of taking the midday as starting point because one is usually focused on their observing window and not the entire day.

For example, if we sorted starting midday and you were interested in objects first transiting during the night, you’d need to go to the middle of the entire list to see what you are looking for.

Regarding the icon, I agree. The entire search and observing lists pages are getting a complete makeover in the upcoming months and I’ll take that into consideration

Hi Sebastian,
Many thanks for your reply …

What you say makes complete sense, particularly if you plan and observe on the same day.

I usually plan my observing session days or weeks in advance (sometimes months), so I’m usually interested in what happens between Midday and astronomical dark, because my view to the North and East is obscured by buildings, so I usually need to shoot targets that transit just before astronomical dark, and track them to the West.

This means that when I look for targets, I almost always have to go halfway down the list to the point where Telescopius displays them immediately after Midday, which is a bit tedious when you have hundreds of candidates.

Also, if you’re planning targets months in advance (the yearly altitude view is great for this), the ‘visible’ settings aren’t really helpful because times for Astronomical Dark change from day to day.

So, what would be really helpful is perhaps another sorting option - starting at midday.

But if I set the initial hour to 7pm/19 hrs notice how the first objects transit right before the civil sunset: 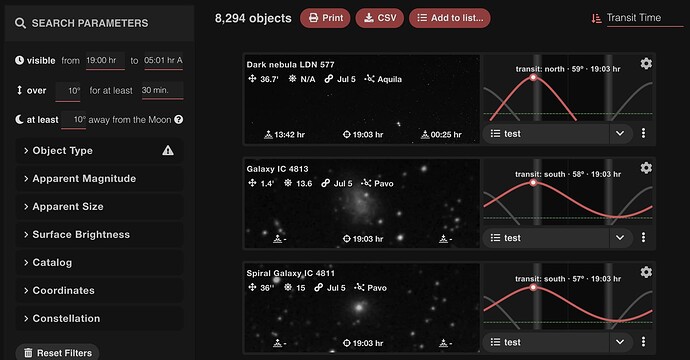 There’s one caveat to this - this only works in the search page. In Observing lists we don’t have the notion of “observing time window” so they are always sorted starting at the astronomical sunset.

Also, if you plan weeks or months ahead, don’t forget to update the date in the observatory parameters at the top left corner of the screen. This way you’ll see the charts for that specific day instead of having to guesstimate anything.

I hope this helps!

Hi Sebastian,
Many thanks for those suggestions - yes, they certainly help