Searching for targets to the East or West of your location is trickier than limiting the results to North/South, because all objects rise from the East, transit either North or South of your location, and then sets on the West.

When your visibility is limited to the East or West, you will have to play with the observing time window, and it’s probably better understood with an example.

As you can see, objects transiting and going West soon are displayed first, followed by the ones transiting soon after.

Conversely, if you would like to see objects on your West only, you would have look for objects transiting at 10pm at the latest. Currently there is no way of inverting the search result list but an easy workaround is to go to the last page and navigate backwards. 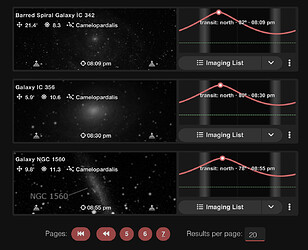