Can you help identify this 'Mystery Object'?

Can you help identify this Mystery Object << click here ?

It shows what appears to be an elliptical object, with a colour gradient changing from white > orange > red progressing outwards, suggesting a hot object.

The fact that the object’s position appears to move very slightly across a sequence of images taken over a period of 2 1/2 hours eliminates the possibility of a sensor artefact, a cosmic ray, or a reflection from a terrestrial object.

It did not appear in any other images taken of other celestial objects earlier or later that night, but did appear on each and every image of the Helix Nebula.

The MO’s brightness increased and decreased as high-altitude cloud drifted across the imaging field, as did the brightness of the background stars.

There is little doubt that this is a ‘real’ object. 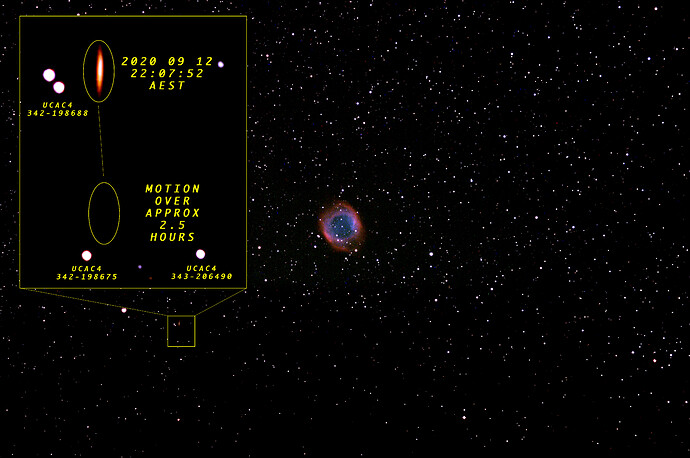 The apparent movement of the MO is consistent with parallax shift as my telescope tracked the Helix Nebula and intermittently corrected its position during the imaging session, suggesting the MO was probably << 1 Lunar Distance from Earth at the time.

I’ve been unable to find any information on man-made objects that match this time and location. Anything in Earth orbit would have left a trace across the image, as can be seen on several other frames from the same imaging session showing satellites whizzing by.

So, I’ve eliminated LEOs, GEOs or other types of artificial satellites.

There were several NEOs in the vicinity at the time. 2020-SO was the best candidate, but it was about 4.6M km from Earth when this image was captured (although it was only 50,000 km = 0.13 LD at closest approach on 1 December). At a size of 3m x 10m, would have been impossibly small for an 80/400 mm refractor to resolve at that distance.

IMHO, the best candidate is the Chinese Kuaizhou 1A rocket that was launched on 12 September 2020 at 3pm AEST from the Jiuquan Satellite Launch Center in China. The rocket aimed to place a Jilin-1 Gaofen-02C satellite into a 535 km sun-synchronous orbit, but failed to deliver its payload due to a malfunction in the liquid-fuelled 4th stage. It was declared ‘lost’ 5 hours after launch - my first image was captured about 3 hours after that.

Q1 : Is it possible the MO is actually the exploded rocket and liquid fuel burning in the upper Thermosphere, which has almost no O2, but is rich in O (about 2E+6 / cm3 at 500 km according to the MSIS-E-90 Atmosphere Model) ??

Q2 : Did anyone else capture images of this part of the sky (between Aquarius / Capricornus / Piscis Austrinus) at around the same time, and did the MO appear in those images ?

Q3 : Can anyone help me find more information about the trajectory of the Kuaizhou 1A rocket ?

Q4 : Does anyone have any other ideas ?